The first flight of a production Typhoon was in May 1941, a little over a year after the prototype's first flight in February 1940. The Hawker Typhoon was to become a formidable aircraft in due course, particularly at low level, but in the scramble to build Spitfires, Hurricanes and other aircraft types needed immediately, the Typhoon came well down the priority list for the overburdened production lines.

An additional brake upon the development and production of the Typhoon, lay in the persistence of some serious design faults, the most deadly being a weakness at the point where the main fuselage was attached to the tail unit. A number of pilots lost their lives as the tail could sheer off when subjected to severe stresses, for example, during the pull out from dives. In fact, one of the test pilots, Ken Seth-Smith, was killed in August 1942, when his aircraft broke up in flight. The loss of DN364 in East Lothian was an example of this very problem.

197 Squadron had formed at RAF Turnhouse but had moved on to Drem in November 1943. It was stationed at Drem till 28th March 1943. It received its first batch of Typhoons on the 28th November from a contract for three hundred Typhoon Ib's which had been built by the Gloster Aircraft Company at its facility at Hucclecote in Gloucestershire. During its time at Drem, the squadron lost four Typhoons: DN313; DN364; DN365 and DN366.
Loss of Hawker Typhoon Ib DN364 - 28th January 1943

Sergeant Cecil Francis Beechey, 656761 RAF, a member of 197 Squadron, took off at 16.15 hrs from RAF Drem on a forty-five minute local flight in perfectly good weather conditions. His aircraft was fuelled and fully armed with his four cannon loaded and Beechey was experienced on this type of aircraft. This was probably a training flight, perhaps designed to simply test run the aircraft or to familiarise himself further with the type. Sergeant Beechey had no designated task to perform. Normal radio contact was made at 16.20 hrs but nothing more was heard from him.

Around 16.35 hrs witnesses on the ground around East Linton heard an aircraft diving through the cloud at 762 m (2,500 feet). John W. Steele was an eye-witness of what then happened. He wrote:

"About 16.35 hrs on the 28th January 1943, many of us in East Linton had just finished work and were returning home when we became aware of a Hawker Typhoon roughly over Smeaton. Suddenly we heard a bang and the tail section of the aircraft parted company with the main fuselage. The tail fluttered to the ground like a leaf while the main part of the plane plunged straight down and crashed into a brick shed in Kingsburgh Gardens, killing the pilot and Kingsburgh employee John McDonald. The whole scene was a blazing inferno with burning fire and exploding ammunition."

John McDonald
[My apologies for the poor quality of this photo. Perhaps someone out there has a better one?]

Very few civilians were killed in air accidents in East Lothian during the war: those at Beech Hill, David Mathieson at Ferny Ness and John. It was sheer bad luck in all cases.

Fighter Command's Accident Investigation branch paid close attention to this crash and it corroborated John Steele's account when it reported that: "…several witnesses had their attention drawn by the engine note to an aircraft which broke cloud in a dive at about 2,500 feet (762 m). It was seen to pull out of the dive but this was immediately followed by a cracking noise, a distinct nose down change of trim and the separation of the tail unit.

The Accident Investigation report on the 4th March concluded that the pilot was in good health and experienced, that the weather was fine and that there was "No evidence…to suggest that there had been any fault or neglect in maintenance, workmanship or material."

Showing that attention was still being paid to the design of the Typhoon, the report stated that: "The cause of the accident appears to have been a failure in the neighbourhood of the transport joint, and investigation into the stresses to which this part is subjected in flight is proceeding."

Indicating the force involved in the crash, the report described how: "The scattered parts were found along a line running approximately downwind to the north-east from the main wreckage over a distance of over one and a half miles."

As a result of the evidence gathered at accidents like this one, the Typhoon's tail was strengthened by fixing metal plates all round the weak area near the tail.

The loss of other 197 Squadron Typhoons

Three days before 197 Squadron became officially operational, Flying Officer Auriol Stephen Nutcombe Gould, 124422 RAFVR, took off from Drem to fly cross country to RAF Heathfield, an airfield close to RAF Prestwick and not far from the town of Ayr. He was twenty-one years old. He does not appear to have flown there in a direct line but, either deliberately or by accident, flew due west and, some miles beyond Glasgow, he flew into Queenside Muir in Renfrewshire. The hills there are similar to the Lammermuirs and only rise to some 453 m (1,551 feet). However, on this day they were completely hidden in mist and rain. Eyewitnesses reported hearing the aircraft approaching in the mist and heard the sounds of the crash. P/O Gould is buried in South Queensferry cemetery.

Frenchman Flying Officer Roger Bokobza, 124377 RAFVR took off on a night training flight from Drem. He was twenty-one years old and not long married to Evelyn Valerie Bokobza. At 02.14 hrs he contacted his base by RT but, in the short time it took for Flying Control at Drem to reply, he had flown into the high ground above Hall's Farm. This lies some three kilometres south-east of Stenton, East Lothian, and is on the very edge of the eastern Lammermuir Hills.

The station's accident report stated that he had disregarded safety heights and had made an error in navigation. This bald explanation, however, was tempered by the inclusion of references to a '…possible failure of radio,' and that 'Flying Control Drem should have told Flying Control East Fortune of the failure of Drem occult [sic] at 00.30 hrs.' The report admitted that the '..Radio control was not efficient [?] should have been told about occult [sic].' Readers may have a better understanding of the word 'occult' in this context. Please let me know if you do.

The crash site is close to the Q Site at Halls Farm.

Roger Bokobza was buried in Lincoln (Newport) Cemetery and his gravestone was inscribed:

On the very same day as F/O Bokobza crashed, if a few hours later and in daylight, Sergeant Pilot Jack Bowler, 657896 RAF, took off from Drem on a training flight. Sgt Bowler was twenty-eight years old and was married to Mollie CM Bowler. The station's Accident Report noted the time as 14.05 hrs and stated that the:

"A/c flew into rising ground. …Pilot entered cloud in a turn at [a] dangerously low altitude. Instead of straightening out and climbing to a safe height, he continued in a shallow turning dive from which there was no room to recover on breaking cloud." It later continued: "Pilot lost control in low cloud. Pilot was inexperienced on type in cloud flying."

Sgt Pilot Bowler hit the ground some 500 yards from Fasney Cottage, deep in the Lammermuir Hills on the Gifford to Longformacus Road. As the photographs below show, wreckage still remains at the site.

During training and until they gained sufficient experience, pilots found it difficult to fly the Typhoon (and similarly many other types) in cloud. The Accident Report noted this danger and made recommendations for changes. The Report continued:

"[It is recommended] pilots be warned of difficulty they may find in turning Typhoon a/c accurately in cloud at first and told how to straighten them up and climb to safe ht." The O/C 197 Sq and the Air Officer Commanding both agreed with this suggested improvement in training instructions. As the Report concluded: "Action taken in effort to prevent recurrence of this type of accident on Typhoons." 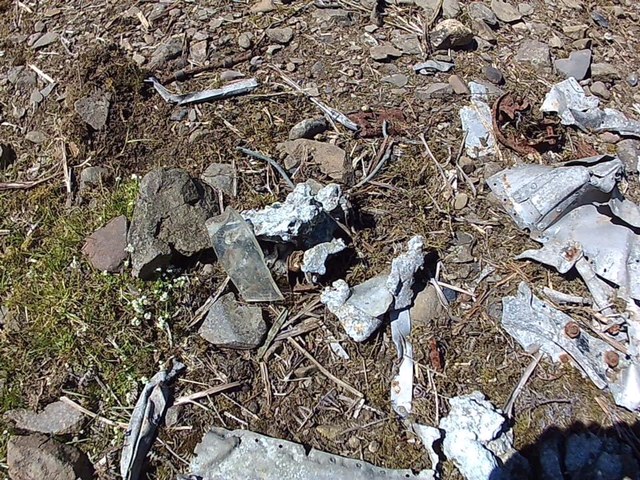